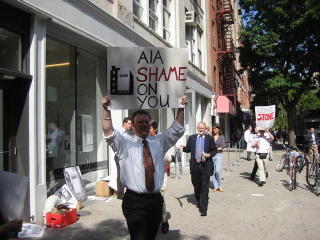 When I saw that the AIA was kicking off the 3rd Annual Architecture Week in with the first public presentation of plans to revamp 2 circle, I predicted here on Polis that shit would hit the fan. And sure enough, The Real Estate was there and took photos:

…today’s event at the Center for Architecture presented an up close battle of ideas over what to do with Edward Durrell Stone’s iconic structure. Sign-waving, brown-bag protestors paced the sidewalk, while in a sleek, downstairs auditorium, architect Brad Cloepfil gave the first public presentation of the much-debated design. Rick Bell restated the position of the A.I.A., that the case should not be brought before the Landmarks Commission.

The Lollipop building has been the subject of eight lawsuits brought by Landmarks West trying to stop the and Design from changing the façade. I’m kind of agnostic on this fight, but I have to disagree with Tropolism who 1. equates preservationist efforts to save the building with earlier efforts to save a parking garage on , and 2. chastises the preservationists by reminding them that sat empty and derelict for years. If that was our standard for preservation, how many treasures – that are now fully restored and put to good use – would have been leveled? Too many to count.

Rendering of new façade, left, as is, right. 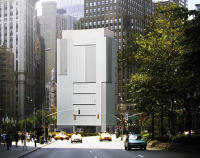 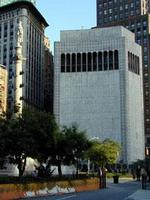 Posted by Lisa Chamberlain at 12:05 PM