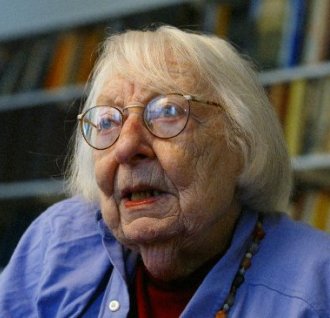 There are very few public figures whom I would mourn more than Jane Jacobs. She died this morning in her adopted home of Toronto, where she moved with her family from New York City so that her son would not be drafted during the Vietnam war. Of course, her life and letters are well known by most anyone reading Polis, but her impact has been so personal for me and many others. Reading a magazine interview with Jane Jacobs many years ago led me to The Death and Life of Great American Cities (her seminal work published in 1961, although it reads as if it could have been written last year), which then took my journalism career in the direction of urban planning and design, economic development, and all the concomitant issues of city life. She was more than a national treasure, but a maven for citizens everywhere. I propose a gathering at 555 Hudson Street in the West Village between Perry and W. 11th, where she lived for many years and waged her battles against Robert Moses, and composed The Death and Life of Great American Cities. Who's in? (photo by Globe and Mail)